Stern was born on November 14, 1913 in Riga, Latvia. Her music education began under her mother’s tutelage, though it soon became apparent that her natural skill surpassed her mother’s ability to teach her. To that end, she was sent to the Berlin State School of Music to study under Leonard Kreutzer, where she remained until recommended to audition for acceptance to Curtis. Josef Hofmann served as her examiner during the audition, and immediately accepted Stern as his pupil. In addition to piano, Stern’s other main area of study was composition under Rosario Scalero.

Stern’s classmates at Curtis, including Shura Cherkassky (Piano '35) and Jorge Bolet (Piano '34), remember her as a free spirit who found it difficult to cope with the rigid structure espoused by Curtis at the time. Her inability to thrive became so evident that Hofmann, in December 1927, took the unprecedented step of granting her permission to live in New York and commute to Philadelphia on Tuesdays and Wednesdays for her lessons at Curtis.

Unfortunately, despite an increasingly successful solo career outside of Curtis (The Philadelphia Inquirer wrote in 1926 that Stern   “possess[ed] a talent which is met with only once or twice in a musical generation”) this accommodation of Hofmann's proved insufficient, and  Stern was dismissed from the institute after the 1929 spring semester.  The letter, sent by Dean Grace Spofford, partly read thus:

“Mr. Hofmann asks me to tell you that you are not to be retained as a student in the Curtis Institute of Music.  He does not consider that   you   have availed yourself of what the Institute offers, in addition to piano instruction. At the close of the year, Mr. Hofmann does not   find your progress satisfactory and in view of the situation, as outlined above, he is not willing for you to continue as a student.” 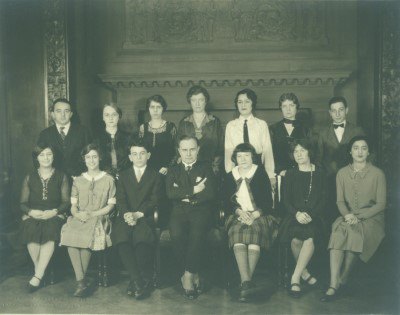 After Stern left Curtis, she continued her study with various private teachers and performed in such esteemed venues as the Academy of Music, The Town Hall, Aeolian Hall,  Carnegie Hall, and Queen’s Hall, London (for the 1931 Proms concert). However, despite these career successes, Stern apparently felt she had more to learn from Hofmann and, in 1937, asked if he would accept her as a private pupil. Hofmann agreed, and the two began lessons shortly thereafter. Tragically, less than a year later on May 15, 1938, Stern passed away at the age of 24 due to an unspecified infection.

During her brief 13-year career, Lucie Stern’s natural and prodigious talent led her to accomplish more than many do in a lifetime. It is natural to wonder how her experience at  Curtis may have been different had she attended in later years when individuality and independent thinking were encouraged rather than stifled, and she would have been free to explore and express her personal artistry. Or, had she not died so young, to what heights her talent would have taken her.