Born into the Quapaw Tribe of Oklahoma in 1895, his musical talent was recognized from a young age and he began to study violin with a Catholic sister at the Mission. He then attended the Carlisle Indian School and was allowed two hours of practice per day while the other students were playing sports. He graduated in 1912 and pursued violin at the Dana Musical Institute in Warren Ohio, where he trained on and off for three years. He then studied at the Conservatoire Americaine in Fontainbleau, France, and graduated from the Curtis Institute of Music with a degree in composition in 1927.

The image below is a letter written from Fred Cardin to Mr. Friedman of the Carlisle Indian School when he had just arrived at the Dana Musical Institute. Mr. Friedman and the school had provided the financial support for Fred to continue his musical studies.

Fred Cardin’s extensive formal musical training provided him the ability to understand the beauty and complexity of Native American music from a theoretical viewpoint; more specifically, he admired the polyrhythmic quality and frequent use of quarter tones. In a 1950s interview with the Philadelphia Inquirer, he stated: “The universal thing in music is rhythm, and in this the Indian excels.”

He built an excellent reputation for himself as a violinist and regularly performed recitals including both classical repertoire and Indianist compositions. A 1923 performance of the Tartini Sonata was described by the Miami Herald Record as “with the fire and sympathy of a great artist” while his Native American selections were “especially appealing”. 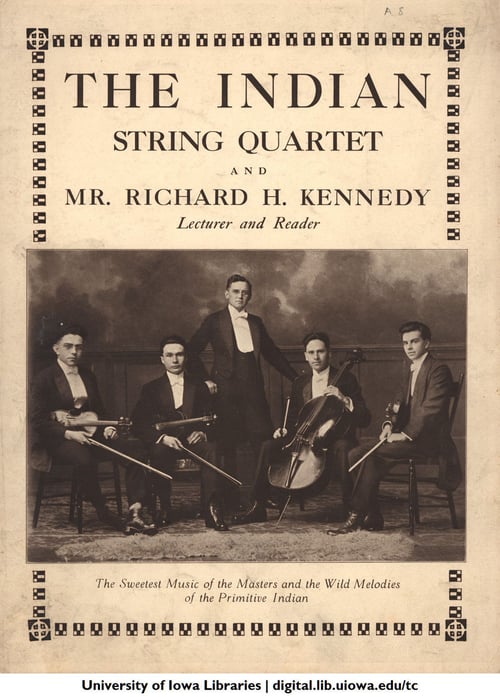 In 1916, Cardin became the first violinist of the “Indian String Quartette”, a group formed by the Indianist composer Ruthyn Turney. The string quartet was comprised of members each with Native American affiliation: second violin was Alex Melodivov of the Aleut tribe in Alaska, viola was William Palin of the Flathead tribe in Montana, and cello was William Reddie of the Hydah tribe in Alaska. Much like Fred Cardin’s individual concerts, the program was often divided in half; first, the classical selections performed in tuxedos, and second, the Native American compositions performed in traditional Native American regalia. The Indian String Quartette was often featured on the Chautauqua Circuit, a traveling event with the goal of bringing education and culture to the greater public. ii

Fred Cardin then formed his own group entitled the “Indian Art and Musical Company”, a group with ever-changing instrumentation but most often including violin, piano, cello, and voice. They would perform “Pueblo Songs”, “modern harmonized songs”, and “songs with orchestra” together with pieces by Rachmaninoff, MacDowell, and Brahms. In comparison to the Indian String Quartette, this group held greater emphasis on the Native American culture exhibited in their performances; the entire concert and all promotional materials featured the members in Native American dress. Fred Cardin was not only successful as a performer but as a composer, his main goal being the preservation and appreciation of the spirit of Native American music. His works featured a heavy rhythmic presence with a floating melodic line and were often transcriptions of songs that had only existed in the memory of his people.

He was a prolific composer, releasing “Cree War Dance” with the Carl Fischer publishing company and his collaborations with Thurlow Lieurance (another Indianist composer): “Lament” and “Ghost Pipes (Indian Idyl)” with the Theodore Presser Co. His composition “Great Drum” for chorus and dramatic reader was performed at the New York Town Hall in 1930 and was the only composition to be performed again the next year due to its popularity. iii

In his later years, Fred Cardin taught music at the Reading Senior High School in Reading, Pennsylvania. While there, he wrote a historical pageant, “Thunderstorm”, that was often performed at high school graduation ceremonies. He was heavily involved in music as the director of the Ringgold band and Reading Civic Opera and was a member of the Reading Symphony Orchestra up until his death in 1960.

You can see images of the quartet and promotional materials for the Indian Art and Musical Company at: https://digital.lib.uiowa.edu/islandora/search?type=dismax&f%5B0%5D=mods_subject_name_personal_namePart_ms%3ACardin%2C%5C%20Fred

To locate Cardin's score, Cree War Dance: on an Indian melody recorded by Thurlow Lieurance / for violin and piano, in the Curtis Library see https://roc.curtis.edu/record=b1021550~S1

Claire Thai (Harp '22) is a student of Elizabeth Hainen from Tucson, Arizona.  In her free time, she enjoys working with computers and playing with her three Shih Tzus.