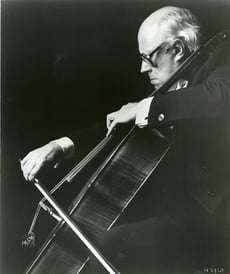 The Curtis Institute was fortunate to enjoy a long association with Rostropovich stemming from his close friendship with pianist Rudolf Serkin. Serkin, a renowned pianist and Curtis director from 1968-1976, often invited Rostropovich to Philadelphia to lead master classes and conduct the CSO in both rehearsals and performances. These frequent visits to Curtis eventually led to Rostropovich joining the cello faculty in 1990, where he taught for five years.

See a program of Rostropovich conducting the CSO here: https://archive.org/details/recitalprograms1989curt/page/n21/mode/2up

Also on this day: