Throughout its history, Curtis has had maintained relationships with local media interested in broadcasting Curtis performances. Curtis has a long and successful relationship with local radio and TV stations like WHYY and continues to broadcast its own streaming (and, these days, “socially distant”) performances on its YouTube channel. 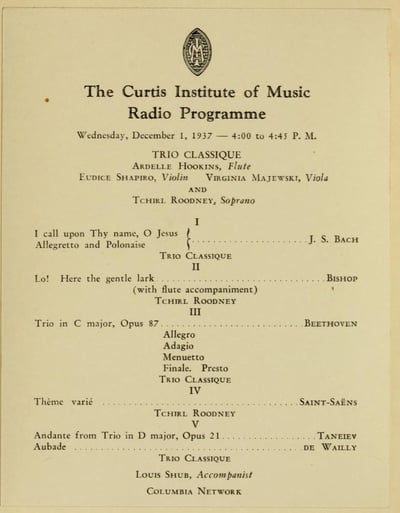 For several years, the show’s theme song, Berceuse, op. 20 no. 5, by Josef Hoffman, was played live by a Curtis student on each show. Students would gather in the common room to listen to each week’s broadcast.

The Curtis Library has maintained several years’ worth of these recordings in its collection and has recently made them available for streaming via the Curtis Institute of Music Open Archives and Recitals (CIMOAR). These performances are available to the public, along with visual and text collections from the Curtis Archives. Highlights include the broadcast premier of Samuel Barber’s choral piece “A Stopwatch and an Ordnance Map,” conducted by the composer, and Stravinsky’s Concerto for Two Pianos performed by Leonard Bernstein and Annette Elkanova.

If you are looking for particular broadcasts, you can search in CIMOAR or the library catalog. More broadcasts will be added to this collection over time, so be sure to return to CIMOAR for more!