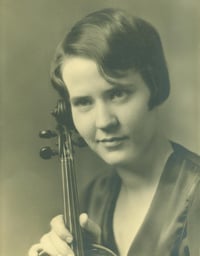 The subject of student life is rarely well documented in archival collections. To find out how students experienced life outside their lessons and practice time, we depend on the personal memorabilia and recollections of alumni. Such contributions are the basis of Curtis’s recent exhibit on student life. Thanks to our most senior alumni and faculty, life at Curtis in the 1940s is well documented, while the late Eleanor Sokoloff (Piano ’38) kindly allowed us to record her personal recollections of student life in the 1930s.

However, for the 1920s—the subject of the online exhibit The First Years—we have no living witnesses. This makes a recently processed collection of 135 letters especially valuable. Written by violin student Ella Geer to her fiancé during the 1926–27 school year, the letters offer a wealth of information about the way Curtis students learned and lived, and how they spent their free time. They describe places that disappeared when the concert hall was built, the terror and thrill of an orchestra rehearsal with Leopold Stokowski, sneaking into the Academy of Music, and drinking whiskey during Prohibition.

Ella Geer (1907-2000) was born and raised in Charleston, Illinois, and began violin lessons at age 10. After finishing high school she started taking violin lessons with Ellis Levy, assistant concertmaster of the St. Louis Symphony, traveling weekly to St. Louis, Missouri with a railroad pass. Her father (a railroad engineer) died in May 1925, leaving her mother and sisters little money. In the spring of 1926 she became engaged to her former classmate Kieth (sic) Emery. Her mother thought she was too young to get married, being only 18, so with Levy’s encouragement, Ella decided to apply to the newly founded Curtis Institute of Music. She initially hoped to study at Curtis for two years, aiming for a career even after she was married. Though Ella gave up on the idea of a career halfway through the school year, she continued to work hard at her studies, and made the most of the opportunities that Curtis and Philadelphia had to offer. At a time when all students were said to be on constant probation, she made enough progress to be invited to stay for another year. But she was firm in her decision, and married Kieth in April 1928 in Chicago. Her daughter, Carol Emery Bastian, donated Ella’s 1926–27 letters to the Curtis Archives in 2004, four years after Ella’s death.

A violin student at Curtis

Ella arrived in Philadelphia on Monday, September 27, 1926. Two days later, she auditioned at Curtis and was accepted. At the time the violin faculty consisted of five faculty members, headed by Carl Flesch. Together they taught 43 students in 1926–27; the entire student body that year numbered 295. Ella was assigned to Frank Gittelson, whom she described as a “peach.” In addition to her violin lessons, ensemble, and orchestra class—led by Marcel Tabuteau—she took secondary piano, as well as classes in music theory, solfège, acoustics, and music history. In addition, her “supplementary studies” included a lecture series on Comparative Arts and a class in Eurhythmics (“That is a course in rhythmic dancing to make you graceful & sensitive to rhythm. I need such a course! I’ll enjoy wearing the bathing suit and ballet slippers a lot. I hope the room is warm.”)

Carl Flesch’s students had an elevated standing at the school and included (among others) Iso Briselli, Jacob Savitt, and Henri Temianka, who became a very good friend. Playing for Flesch, which she occasionally had to do, was frightening. So was playing for Tabuteau—when she had to play a passage for him in orchestra class he told her that she was an example of “how not to do it” (March 18, 1927).

Lunch below the Concert Room

Attendance at student and faculty recitals was mandatory. In the 1926–27 school year, before the new concert hall was built, recitals were held in the “Concert Room,” the mansion’s former dining room, located east of the Common Room. Each student recital presented the studio of a specific teacher and only the best students had the opportunity to play; during the 1926-27 school year only Flesch’s students performed. Underneath the concert room, in the basement, was a lounge and smoking room that was also used as a lunch room. (“We can get a good lunch for 25 or 30 ct. The food is delicious and the whole atmosphere so good. The tables and chairs are darling and each table has a little light. It is kept spotlessly clean by the maids.”)

Although Ella did not know it, she witnessed the last year that Leopold Stokowski—according to the Catalogue, “the salient figure among the great conductors of today”—was in charge of the Orchestra Department, providing students “the training which has made the Philadelphia Orchestra the foremost in the world.” The following year, Stokowski’s assistant conductor Artur Rodzinski would take over his position as head of the department (visit the Conducting at Curtis exhibit). Ella was hugely excited about Stokowski, whom she called “God.” Her description of the first rehearsal on October 7, 1926, explains what we see on the well-known photograph of Stokowski rehearsing the orchestra a year earlier, seated next to the assistant conductor at the time: “[Stokowski] is the most dominant personality I have seen yet. … They say he was good natured last night—I hope to God I never see him angry. He didn’t do the actual waving of the baton. He sat in a high chair above Mr. Rodzinski, who did the actual beating. He saw everyone, criticized everything, bossed Rodzinski around, gave general hell. He was wonderful though. His criticisms were brisk, right to the point, but they cleared up all the different things. … He expects you to give him every atom of strength, brain, body, soul—then he makes an orchestra.”

The “Curtis Box” at the Academy of Music

Playing under Stokowski’s direction would become one of the best experiences of the year for Ella. Another highlight was attending concerts at the Academy of Music featuring other world-famous conductors. Curtis held season tickets to the Philadelphia Orchestra in a proscenium box to the side of the stage, known as the “Curtis Box,” and students could obtain tickets at the discretion of Curtis staff. On February 16, 1927, when Ella held a ticket to hear Arturo Toscanini and the New York Philharmonic at the Academy, she boasted she would have seen three of the four greatest conductors in the world: She had heard William Mengelberg with the New York Philharmonic in the fall and, of course, “the great Leopold Stokowski, with whom I am intimately acquainted!” On May 2, there were no Curtis tickets available, but that did not stop Ella and her friends from attending a Philadelphia Orchestra concert under Stokowski: “David Freed gave me a ticket tho & Chris … and the rest walked around to the main entrance & walked right past the door man.” After shouting “Curtis Box” to the ushers, Ella’s classmates made it up the stairs without tickets.

Student life in the “Roaring Twenties”

At the time most students rented rooms in the homes of private families or in boarding houses. Ella initially rented a room for $7 a week, but moved to the YWCA to share a room with another Curtis student, Frances Sheridan (Voice ‘35), paying $2.25 a week. The YWCA provided meal plans and entertainment: On February 18, she reported to Kieth that David Fried (Cello ’29) and Henri Temianka had come by to play pool with her and her friend Christine Colley (Violin ’28). The YWCA also provided some supervision—on January 30 its head summoned Ella for a meeting because she had been reported smoking with her friend Christine during the intermission of a concert at the Academy. About what else went on in the lodgings of Curtis students and outside, the YWCA was blissfully unaware. In her letters to Kieth, Ella is endearingly upfront. She went on dates and attended parties (including a pajama party), but managed to avoid ‘necking.’ Prohibition notwithstanding, it was surprisingly easy for students to obtain alcohol. On March 2, Ella reports she did not drink much during a party because the rye whisky wasn’t very good. On March 6, however, she drank good whiskey with Frances in their room. Ella was initially concerned about the “loose morals” that she came across when she started her studies. However, by March 25, her views had evolved: “By the way, I believe in free love now, for some people. I have met any number of people who practice it … no one here does seem to respect them less.”

On Sunday, April 24, the Curtis orchestra had its annual performance, for which the students had worked so hard. Ella and her friend Christine played among the second violins: “The concert was a great success. Kieth, nothing ever thrilled me like that did, sitting up on that big stage playing to that great audience with Stoky conducting. You couldn’t help but play. It’s about the most thrilling thing that ever happened to me. It all seemed like a dream that just plain Ella Geer from out in Illinois would be sitting there playing under the great Stokowski.”

On Thursday, May 25, Josef Hofmann—who would be the school’s new director—ended the school year with a final recital, including eight encores. Ella wrote: ”My, I felt pretty sad to look around the beautiful room and think it was the last time I would ever sit there. My school days are over, Kieth, and it seems rather tragic.”

Ella left for home the next morning.