Austrian composer Richard Stöhr (originally Richard Stern) was born on June 11th, 1874 in Vienna. Richard showed an aptitude for composition at a young age and began writing music at the age of 6. His father, Samuel Stern, was the professor of medicine at the University of Vienna and young Richard followed in his footsteps, graduating with an MD from the University of Vienna in May of 1898. Immediately upon graduation, he decided to pursue music with great conviction. In an 1897 entry from his annual diary summaries, he wrote: “When I now state that I am driven to music, I do not deliberate. My ambition alone is already big enough to be the guiding principle.” It was during this time that Richard converted from Judaism to Christianity and changed his name from Stern to Stöhr.

In 1898, Stöhr began studies at the Vienna Academy of Music as a student of Robert Fuchs and eventually earned a PhD in 1903. He worked at the Academy of Music for many years, first as a collaborative pianist and chamber music coach, then as replacement teacher upon Fuchs’ retirement, and finally, a recognized professor in 1915. In 1904 he was married to his first wife (referred to as Lusika in his diary) and in 1906, he published his “Harmonielehre” which was met with great success. With the start of the first World War, he was conscripted to serve as a doctor in a hospital in the suburbs of Vienna but was able to continue teaching and composing at the Academy of Music. In the decades after the war, his works became quite popular and were performed hundreds of times each year throughout Europe.

In 1923, he got a divorce from his first wife (from whom he had been separated since 1907) and was able to remarry his long-term partner, Marie (Mitzi) Eitler. The couple had three children in the 1920s: Richard, Heinrich (who tragically died at a young age), and Hedwig. Before the outbreak of the second World War, Stöhr was respected as a leading music theorist with multiple treatises and textbooks as well as a prolific composer and pianist.

The annexation of Austria on March 12, 1938 by Nazi Germany immediately resulted in the termination of Stöhr’s employment at the Academy of Music on grounds of his Jewish heritage. From a 1938 entry in his journal: “With our land’s annexation the greatest event of Austria’s history came to its end. By this event we have not only lost our fatherland but the Jews also their positions, their fortunes and their honour. Both I and all my Jewish and half Jewish Colleagues were pensioned off and although the worst things as the loss of our apartment, imprisonment, tortures of all kind have been spared to me (at least until now) my whole system is racked and the daily humiliations we are exposed to apart from the constant fear and the enforced idleness are making advisable my emigration.”

In his search for a way to emigrate from Austria, Stöhr was recommended by former student Alice Carter Foy to Mary Louis Curtis Bok for engagement at the Curtis Institute of Music. With a short-term contract from the Curtis Institute, Stöhr would be able to acquire the necessary paperwork to leave Austria. The letter below shows his urgent request to Mary Louise Curtis Bok for a “sham-engagement” from Curtis as there was already a music theory professor at the Institute. Instead, she sent him a legitimate contract for work as an assistant librarian. 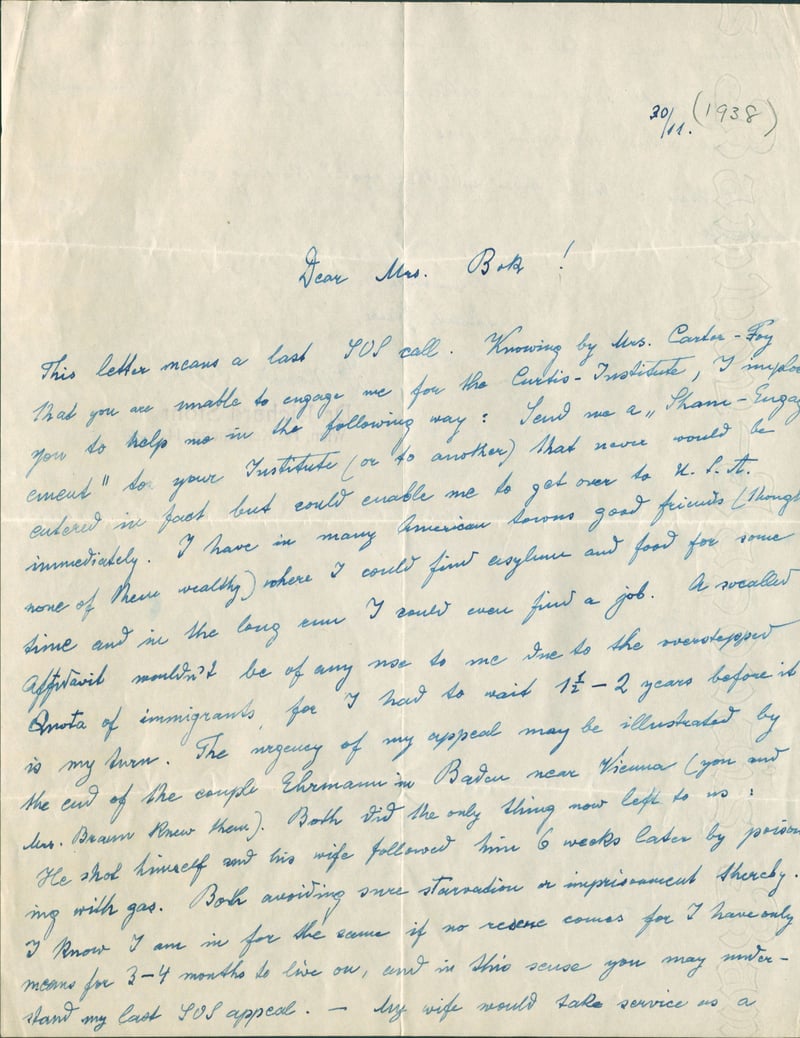 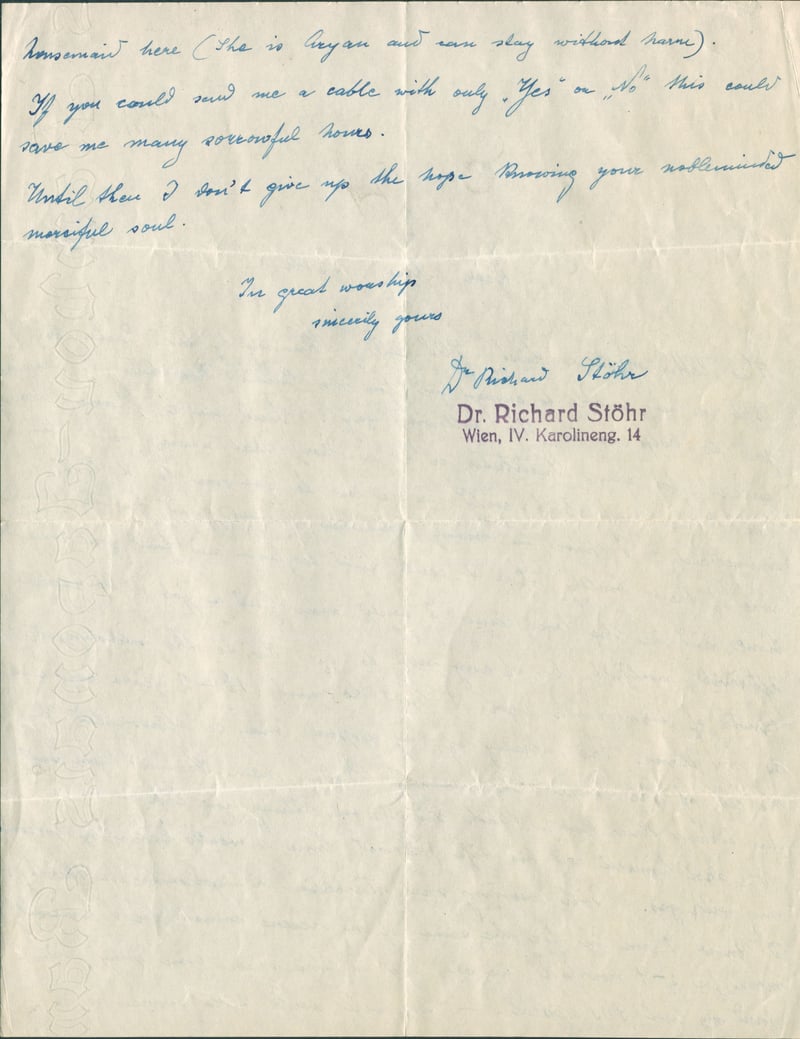 In February of 1939, Stöhr emigrated to the United States. Fortunately, his children were able to leave Austria as well—Richard moved to Sweden while Hedwig traveled to England. Marie was able to stay in Vienna as she did not have a Jewish heritage. Other members of Stöhr’s immediate family were unable to escape the reach of the Nazi regime; in 1941, he learned that his sister, Hedwig, had tragically perished in a Polish transit camp.

Stöhr and his family were not reunited until 1946, when he was 72 years of age. He had since begun teaching German and introductory music theory at St. Michael’s college in Vermont. Though he was separated from his family and he found the country life quite “monotonous”, he considered this time to be his most productive, both in quantity and quality. From his diary: “Continuing work make these days in my comfortable, sunny room with a good piano to the happiest I ever experienced. I composed without thought of having my music published or performed or going public and so I enjoyed unclouded happiness.” Stöhr taught at St. Michael’s until his retirement in 1950. His teaching career had spanned more than 50 years, during which he taught several prominent musicians including Samuel Barber, Rudolph Serkin, and Leonard Bernstein. Stöhr died in Vermont in 1967, at the age of 93.