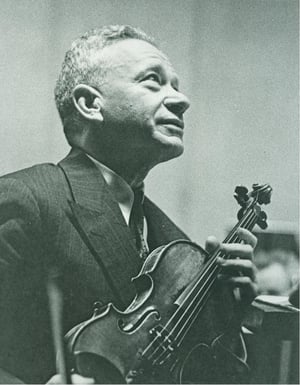 In 1928 Zimbalist accepted an offer to join the violin faculty at the fledgling Curtis Institute of Music in Philadelphia. Thus began a long and fruitful association that saw his appointment to head of the violin faculty in 1930 (upon the death of Auer, his former instructor) and then to Curtis director in 1941, a position he held until his retirement in 1968. In addition to his professional ties to Curtis, Zimbalist, a widower, became the second husband of Curtis founder Mary Louise Curtis Bok in 1943.

For his 90th Birthday, PM Magazine (1970s-1980s) aired a brief story highlighting Zimbalist's life, career, and family.  The archived footage is part of the Efrem Zimbalist Collection held in the Curtis Archives. Click here to view the record and link to the video.

Zimbalist died at age 94 in Reno, Nevada in 1985. His legacy can still be heard reverberating throughout the corridors of Curtis, passed on by students such as Leonid Bolotine (Violin ’30), Oscar Shumsky (Violin ’32), Aaron Rosand (Violin ’48), Joseph Silverstein (Violin ’50), Michael Tree (Viola ’56), and Shmuel Ashkenasi (Violin ’63).