The Curtis Symphony Orchestra serves to train a new generation of musicians. But what of the conductors who lead it?

The conductors who have led the Curtis Symphony Orchestra (CSO) - beginning with Leopold Stokowski in 1924 - have each left their unique stamp, culminating in the truly unique musical ensemble the CSO is today.

The Curtis orchestra met for the first time on November 14, 1924 in the Comm

on Room. Just six years later it had performed in the Academy of Music and Carnegie Hall, broadcast concerts on radio, and played for Curtis’s first opera production, Eugene d’Albert’s Tiefland. 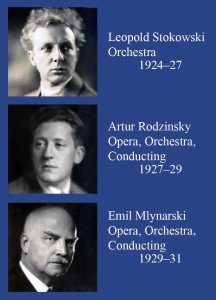 By the end of the 1926-1927 season Stokowski felt confident enough with the orchestra’s progress to hand the conductorship to Polish-born Artur Rodzinski, assistant conductor at the Philadelphia Orchestra. However, Rodzinski’s tenure proved short lived, so Stokowski then recommended violinist, composer, and conductor Emil Mlynarski as his replacement. In addition to leading the orchestra, Mlynarski also taught conducting in a new program Rodzinski had begun in 1927. By 1931, when Fritz Reiner took over the program, four students had majored in the subject.

When Hungarian-born Fritz Reiner, former conductor of the Cincinnati Symphony Orchestra, arrived at Curtis, he proved the complete opposite of the more relaxed and personable Mlynarski, commanding respect and even fear. But the orchestra benefited greatly from his rigorous methods, and Reiner demanded meticulous preparation from his conducting students, too. As Leonard Bernstein (Conducting ‘41) recalled in later years: “You had no right to step up on the podium unless you knew everything about what every member of the orchestra had to do, and if you didn’t, God pity you…” Bernstein was one of twelve students who majored in conducting under Reiner. Others included Boris Goldovsky (’34), Vincent Persichetti (’39), and Lukas Foss (’40). 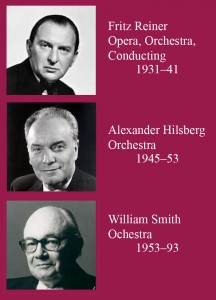 Reiner left Curtis in 1941 due to the discontinuation of the conducting program and a suspension of the CSO, both casualties of ongoing financial constraints at Curtis brought about by the war. It was not until the war ended in 1945 that the orchestra once again regrouped under longtime violin faculty member Alexander Hilsberg, concertmaster of the Philadelphia Orchestra. However, Curtis director Efrem Zimbalist continued to keep orchestra costs down throughout his tenure (1941-1968). In 1953 Hilsberg was succeeded as head of the Curtis Orchestra by the new associate conductor of the Philadelphia Orchestra, William Smith, who worked on symphonic repertoire during reading rehearsals. During this period, the orchestra performed only occasionally.

When famed pianist and longtime faculty member Rudolf Serkin succeeded Efrem Zimbalist as director of the Curtis Institute of Music in 1968, he asked his good friend Eugene Ormandy, the Philadelphia Orchestra’s music director since 1936, to join the Curtis faculty to conduct the orchestra. Ormandy accepted, but on one condition - that his salary be donated to benefit students in need. Ormandy’s appointment heralded a new era in which the Curtis orchestra not only performed more frequently, but also under the baton of guest conductors of the Philadelphia Orchestra under Ormandy’s invitation - a tradition that continues to this day. Ormandy, who referred to the Curtis orchestra as “his other orchestra,” remained on the faculty until 1977. 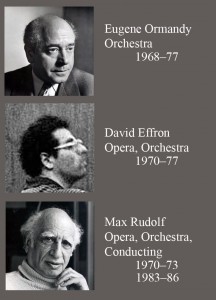 In 1970 Serkin appointed the German-born conductor Max Rudolf to head the opera department and revive the conducting program. Rudolf appointed a member of the New York City Opera conducting staff, David Effron, as his assistant. When Rudolf left Curtis in 1973 Effron stayed on as opera conductor and also conducted the Curtis orchestra; from 1976-1977 he was the orchestra’s principal conductor.

In 1977, John de Lancie, Serkin’s successor, restructured the orchestra department, with Max Rudolf returning from 1983 to 1986 to head the orchestra and conducting departments. Conducting graduates during this period included Robert Spano (’85), Barbara Yahr (’86), and Michael Stern (’86). Rudolf’s book, The Grammar of Conducting,  written during this time, is still used at Curtis today.

When Gary Graffman became Curtis’s director in 1986 he appointed Otto-Werner Mueller as conductor of the orchestra and head of the conducting department. Mueller would head the conducting program, supported by the Helen F. Whitaker Fund, for 26 fruitful years. The curriculum expanded to include extensive analysis of scores and orchestration as well as instruction in conducting and rehearsal techniques. Students gained practical experience through weekly “lab orchestra” sessions and in orchestra performances in the Student Recital Series. In an Overtones tribute in 2012, Mueller - who held the Rita E. and Gustave M. Hauser Chair in Conducting Studies and also headed the conducting program at Juilliard - is described as “the most important conducting pedagogue of the last 50 years.” 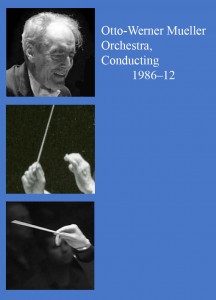 In addition to benefiting from Mueller’s guidance during these years, the CSO reinforced its historic ties with the Philadelphia Orchestra, performing under music directors Riccardo Muti, Wolfgang Sawallisch, and Christoph Eschenbach. Other renowned conductors who visited Curtis during Mueller’s tenure included Andre Previn, Simon Rattle, and Zubin Mehta.

In 2013, Curtis launched its new conducting program with Yannick Nézet-Séguin as mentor conductor.  This began a new chapter in the history of conducting at Curtis and its longstanding relationship with the Philadelphia Orchestra. To read up on that history, come back to the Curtis Archives in 20 years. Or start following that history today!